The “Magical Beast Sherbert” manga series, being written by Rai☆ and drawn by Mochiusagi, will be released in print and digitally in English by American publisher Ablaze Publishing. Ablaze will handle English worldwide publishing rights to the manga, giving international readers a chance to enjoy the magical adventures of Sherbert and Erika!

The physical release will be published next year in tankobon format, and give readers around the world a chance to learn the origins of the magical duo as they meet for the first time, face off against Sherbert’s powerful enemies, the Kuuka, and discover the power of the special bond which forms between them.

Ablaze Publishing has published a press release on the partnership, which can be read here: https://www.ablaze.net/magical_beast_press_03_31_2022.html 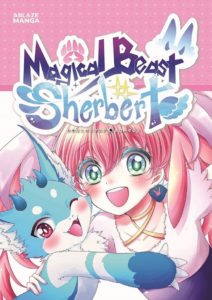